The following are regional award recipients of the Premier’s Award for Agri-Food Innovation Excellence from Norfolk County:

Ramblin’ Road Brewery Farm – La Salette: Microbrewed beer and kettle chips: for many Ontario consumers, it’s a match made in heaven. For the Norfolk County “brewery farm” that produces both, the relationship is just as compatible. After slicing potatoes for the kettle chips, Ramblin’ Road Brewery Farm bathes them in beer stock to create unbeatable flavour. But the synergy doesn’t stop there. One day, owner John Picard eyed the potato washwater and wondered if the starch-rich liquid could be fermented into beer. After six months of research and trials, he concluded it could. Ramblin’ Road premium Dakota Pearl Potato Ale is now the brewery’s best-selling beer. Tasty chips, tasty beer and a little innovative recycling: some marriages were simply meant to be. 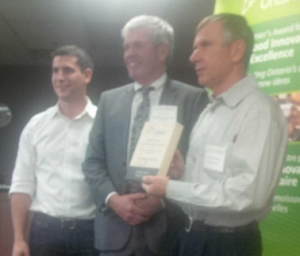 Zurbuchen Farm – Waterford: There’s a whole lot of leading-edge technology behind every apple in Zurbuchen Farm’s 50-acre orchard. For years, this grower has scoured Europe for the latest and greatest technologies to apply here in Ontario. It’s a long list. Since 2010, the orchard has used a mechanical thinner that removes flowers without using chemicals. A platform aid for pruning, equipped with pneumatic tools and a compressor, has significantly reduced effort and improved worker safety. A belt system and bin trailer has increased productivity and eliminated the need for heavy bags. Finally, Zurbuchen Farm uses a specialized picker to retrieve windfall apples for juice and processing markets. With its finger on the pulse of innovation, this grower is helping drive the entire industry forward.