Labour concerns are the focal point of correspondence between the Value Chain Round Tables representing Agriculture Production and Processing, and the Federal Minister for Agriculture.

The Government of Canada’s Minister of Agriculture and Agri-Food responded on August 1, 2017, to a joint letter co-signed by the chairs of 15 value chain round tables.

The letter from the Value Chain Round Tables All Chairs Forum, written on May 19, 2017, outlined concerns about access to labour for agriculture production. The letter expressed concern that the federal government’s goal of $75 billion in agriculture exports would lead to the industry requiring 55,000 more full-time employees and this could be a significant obstacle without access to labour. 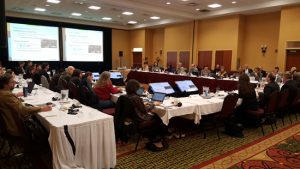 Thank you for your letter, which you co-addressed to the Honourable Ahmed Hussen and the Honourable Patricia Hajdu, regarding the difficulties agriculture and food processing businesses are experiencing in recruiting and retaining labour. I regret the delay in this response.

Budget 2017 highlighted the importance of the sector and the major contribution that it is expected to make in the coming decades as rising global demand for food will reach new levels. In order to achieve the Government’s target to grow Canada’s agri-food exports to at least $75 billion annually by 2025, the sector will require access to sufficient labour.

Farming and food processing operations face many challenges in recruiting and retaining a sufficient number of workers to match their business needs, and temporary foreign workers have become an important part of the workforce.

I appreciate your continued efforts to ensure a common understanding among federal officials about the agriculture and agri-food sector’s unique labour requirements. This includes the work of the Value Chain Roundtables in initiating the development of the Canadian Agriculture and Agri-Food Workforce Action Plan, which documents key labour challenges, proposes solutions to help improve industry’s access to domestic and foreign labour, and outlines measures to improve the skills of workers. I encourage you to continue to use the Value Chain Roundtables as a forum to help develop longer-term strategies to strengthen industry competitiveness and foster innovation.

As you may know, the Government of Canada has announced several actions and commitments to improve the Temporary Foreign Worker Program over the past few months, including a commitment to review the current pathway to permanent residence for all temporary foreign workers. In April 2017, the Government also announced its intention to undertake a review of the Temporary Foreign Worker Program’s primary agriculture streams and examine the sectors that are heavy users of the Program, including the meat processing industry.

Agriculture and Agri-Food Canada (AAFC) is working closely with Employment and Social Development Canada as it leads the meat processing sector review and the review of the Temporary Foreign Worker Program’s primary agriculture streams. The Government is ensuring that many of the issues raised in this letter, as well as those raised in the Canadian Agriculture and Agri-Food Workforce Action Plan, are being considered as part of these reviews.

While your concerns are related to matters that are under the purview of my colleagues, the Honourable Ahmed Hussen and the Honourable Patricia Hajdu, AAFC is engaging interdepartmentally at senior levels to ensure collaboration on the issue of labour availability. I have also requested that Mr. Marco Valicenti, Director General, Sector Development and Analysis Directorate, Market and Industry Services Branch at AAFC, set up a meeting with a subset of the All Chair Industry Chairs to further discuss labour challenges facing the agriculture and agri-food sector. I look forward to receiving updates from senior departmental officials on the status of the issue as well as ongoing industry–government discussions.

I trust this information will be useful to you. Again, thank you for writing with your concerns.