According to a recent report by the Simcoe Reformer, research is underway at the Vineland Research & Innovation Station that will hopefully change that. The goal is to replace cultivars from traditional sources such as North Carolina with cultivars produced here. The leader of the research team is Valerio Primomo.

“Sweet potato is a southern crop,” Primomo says. “We have a short season here, so we need quick-maturing and cold-tolerant varieties for Ontario. Sweet potatoes are a growing trend. It is full of beta carotene, a good source of vitamins B6 and C, fibre, potassium, iron and magnesium.”

The market for sweet potatoes is so strong that Canada was forced to import $42 million worth of the tasty tuber last year. This was in addition to the 1,500 acres produced domestically, most of it in Norfolk County. Canada relies on imports because sweet potatoes are a challenging crop to grow this far north. Fact is, the sweet potato in Canada is a sub-tropical crop trying to make it in a northern climate. 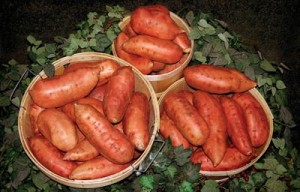 With 600 acres, Peter Van Berlo of Norfolk County is Canada’s largest producer of sweet potatoes. He and several other growers in southern Ontario are helping with field trials.

For decades, the dominant strain of sweet potato was a variety called Beauregard. After nearly a hundred years of cultivation, the genetics of Beauregard began to fizzle out. Taking its place is a variety called Covington. This is the variety grown in southern Ontario, the Carolinas, Louisiana, Mississippi and California. Covington is a reliable producer. Cuttings from North Carolina are planted locally around late May, early June.

Van Berlo set aside half an acre this year for the planting of 20 experimental varieties. Five have shown promise and have advanced to a second round of testing in 2015.

Watching the trials with interest are major food processors such as Pride Pak and French-fry maker McCain’s. Annual per capita consumption of sweet potatoes has doubled in Canada over the past five years to 1.5 kilograms.