Shabatura Produce is one of those companies that show what the soils of the Norfolk Sand Plain are capable of growing.

Now in its fourth generation, the operation was originally in the Boston area. Then, in the early 1990s, the family started moving their farms to the sandy soil around the Windham Centre area. 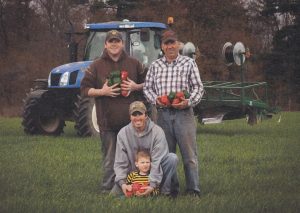 “You can get on the field earlier and go longer (in the fall),” said Eric Chanyi, whose wife Tiffany was a Shabatura. “When it rains you can still get on the soil.”

By comparison, he said following rain on the heavy soils, it’s harder to get back on the ground. It’s important in this operation for workers to be able to get on the field every day to plant or harvest the multitude of fruit and vegetable crops grown.

Only a few decades ago, the sandy soil was widely known as tobacco land.

“Back in the day, you wouldn’t think about growing on sand, but with modern technology and drip irrigation it’s possible,” Chanyi said. The Shabaturas pay close attention to crop rotation and land stewardship.

Chanyi came to be a part of the operation in a roundabout way. He grew up on a farm and paid his way through teacher’s college by working on the farm. But, after graduating, he found teaching wasn’t for him and returned to his farm roots.

“I came to do this because I enjoy it,” he said. “I like the diversity – everyday is different.”

Interestingly, both Tiffany and Peter’s wife Victoria work off the farm as teachers.

Now, Eric is in charge of labour and ensuring the multitude of crops is harvested at time. His mother-in-law Mary looks after the books and food safety regulations. Father-in-law John and brother-in-law Peter get the fields ready and ensure the machinery is in working order. Peter also teams up with Eric on the sales front. 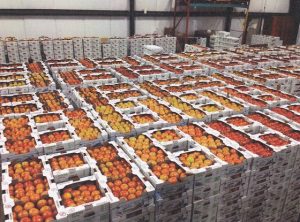 Today Shabatura Produce operates on 1,350 acres, 800 of which they own. The variety of crops includes strawberries, zucchini, spring and summer cabbage, storage cabbage, a variety of peppers, field tomatoes and cantaloupe. The crops are staged in multiple plantings to keep a constant supply through the summer.

“As one field is tapering down in quality, another is just kicking in,” Chanyi said.

Although mechanization is part of the packing lines, and tractors with wagons transport the produce, it is all still picked and put into the baskets by hand.

“It’s all fresh market so quality is important,” Chanyi explained.

That ‘fresh market’ includes Peter’s task of being at the Ontario Food Terminal six days per week in the summer. It also includes dealing with major grocery chains. Shabatura Produce is shipped within Ontario, but also to the eastern seaboard of the United States and to the mid-west.