Asparagus Farmers of Ontario (AFO) is the province’s oldest marketing board, with approximately 85 growers and 3,200 acres of asparagus producing a crop with a farm gate value of $25 million.

“Asparagus is a good news story,” says Ken Wall, chair of AFO. “Demand is up and consumption is on the rise. Growing awareness of healthy eating and the whole local foods movement has been good for our industry”. 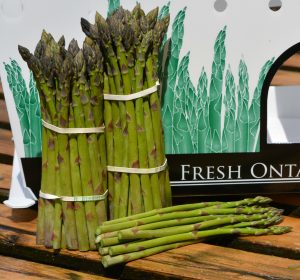 Key in the growth of the industry was the release of the variety Guelph Millennium from the University of Guelph asparagus breeding program in the mid 1990’s. This variety produces up to twice the yield of older varieties, lives longer (asparagus is a perennial crop) and has improved winter hardiness. “Guelph Millennium has had a major impact on our sector. It has meant the difference between a viable asparagus industry in Ontario versus small struggling operations,” says Bernie Solymár, Executive Director of AFO.

AFO is also unique in being the first farm organization to develop its own seed business. In 1996, the organization – which represents 90 growers across the province — negotiated exclusive rights to new asparagus varieties developed through the University of Guelph’s breeding program with great success. This includes Guelph Millennium and Guelph Eclipse (released in 2016), as well as several specialty varieties for foreign markets.

The for-profit company, Fox Seeds Inc., sells asparagus seed not only to Ontario growers but thousands of acres of Guelph Millennium can also be found growing in Michigan, Washington and further afield.  This stand-out variety has since expanded into the European market, generating worldwide sales of more than $1.2 million. Profits from the sales are re-invested through a trust to support further innovative breeding research and marketing programs at AFO.

The AFO itself, in addition to providing major funding to the University of Guelph breeding program, has conducted a number of other research projects over the years. Funding, received through Growing Forward 2, a provincial-federal granting program, has supported projects which have focused on marketing strategies, competitiveness, and development of alternate markets through value-added products (i.e. quick freeze asparagus), as well as on-farm food safety and integrated pest management programs specific to asparagus. Current projects include include yield, density and variety trials, and testing of TomCast, a disease prediction system to better time fungicide applications for the major disease of asparagus, Stemphyilium.