Norfolk County is celebrating the announcement of four winners locally of the coveted Premier’s Award for Agri-Food Excellence.

The Province of Ontario recognizes the work of local agri-food innovators whose ideas and passion strengthen their businesses, grow the agri-food sector, boost the economy and create jobs.

In December, recipients of the 2016 Premier’s Award for Agri-Food Innovation Excellence were honoured in London during a ceremony hosted by the Deb Matthews, MPP for London North Centre.

Recipients were recognized for their contributions to boosting economic growth in Ontario by creating new products that help to support job creation, add value to existing products and support a sustainable environment.

The Southwest Region award recipients from Norfolk County are: 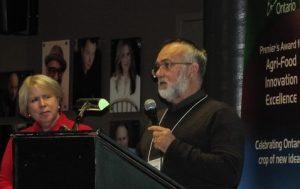 Asparagus Farmers of Ontario, based in Simcoe: AFO is the first grower organization to develop its own seed business.  In 1996, the organization – representing 90 growers across the province – negotiated exclusive rights to any new asparagus varieties developed through the University of Guelph’s breeding program.  One of those varieties, Guelph Millennium, became the seed of choice for growers in Ontario and Michigan.  Worldwide sales hit 1.2 million and continue to grow, generating profits that are funnelled back into breeding research and marketing programs.  This innovative business structure will be a role model for other grower organizations looking to tranform. 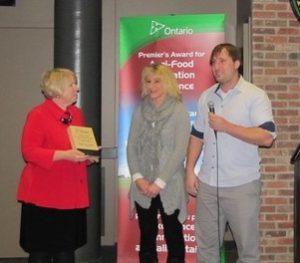 Blueberry Hill Estates, based in St. Williams: After a decade in the blueberry business, Dale Vranckx grew tired of labour-intensive harvesting and losing berries to pests and high winds.  Inspired by the trellises used in high-density apple orchards and grape operations, Vranckx hired a local company to develop a trellis system for blueberry bushes.  Growing vertically made the crop easier to spray and harvest, increased yields by 10 percent, improved worker efficiency, decreased berry losses and added an extra week of harvesting to the season.  Vranckx continues to find new ways to improve his system, including adding netting and developing a better harvester to work in tandem with the trellises.

Creekside Growers, based in Wilsonville: Dahlia tubers need to be planted by hand as conventional planting equipment can’t handle the knobbly tubers.  But Nicholas VanderHeide, a local cut-flower producer, developed a device using a Kongskilde cultivator as a base that digs a trench for the tubers, breaks up soil compacted by tractor tires, hills over the tubers and even applies drip tape- all in one pass.  The only labour required is placing the tubers in the trench.  The new system has doubled the speed of planting.  By installing drip tape during planting, it also allows early-season fertilization which improves production.  With minor modifications, this innovative planter can be adapted to various root crops, berry canes and other irregularly shaped crops.

Meadow Lynn Farms, based in Simcoe: Meadow Lynn Farms was unable to find a market for its leftover whole berries and didn’t want to see them go to waste.  So its owners, the Judd family, borrowed a stovetop steam juicer in 2011 and began producing a pure, pasteurized, seed-free strawberry juice that proved to be a big hit at the Norfolk County Fair.  The process is much less labour-intensive than the common two step cold press and puree methods.  Since then, the Judds have experimented with making other value-added products from the juice, including syrup, jelly and even soup.  It’s an extra stream of revenue fo this pick-your-own fruit operation and a great way for Ontario consumers to enjoy local strawberries long after the season ends. 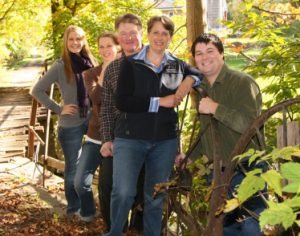