Next Property Group approved by Council, appealed to OMB

Updated October 9, 2015: Norfolk County Council has approved an application by NEXT Property Group to permit a wider range of retail commercial uses on the former airport lands in northeast Simcoe. The application has since been appealed to the Ontario Municipal Board (Reformer report, Oct 5, 2015).

The development was first reported by local media in August 2011: “New shopping centre in works for Queensway“. More local news coverage occurred in March 2014 and August 2015. 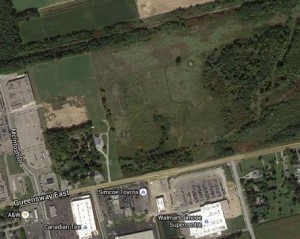