Getting ‘here’ from ‘there’, along with a major contribution coming virtually out of left field were huge positives, said Gubesch.

“That in itself was amazing.”

“Yesterday, it was 28 (thousand),” interjected Norfolk County mayor Charlie Luke, noting Maricann indicated at that time they were hoping for last-minute contact with several more potential donors. “I think they got through to a few of them,” the mayor laughed, adding in an aside, “Maricann’s already got its roots deep in this community.”

Each organization will discuss the most effective use of the shared Maricann windfall, but attracting and retaining new members is a priority for both, for example, existing initiatives including ‘Let’s Play Langton’, whereby registration costs are partially waived, and equipment is offered for four years for beginner minor hockey players, along with a similar ‘Learn To Skate Langton’ program in the LSC.

“We can give back in so many ways to the club,” said Vandendriessche.

The total includes a $10,000 base donation from Maricann and its employees, upped by suppliers and contractors involved in the company’s ongoing 217,000-square-foot expansion at its Langton-area site, on behalf of Maricann in recognition of its effort to support the local community. The $75-million project’s current first phase is scheduled for completion early Q2 of 2018, with the next component of an additional 630,000-square-foot expansion set to break ground early Q1 of 2018.

“We’re building into the future of the community and the people in a similar way we’re building our business, with a long-term view to success,” Ward summed up.

A healthy, vibrant community is a company focus Maricann’s CEO continued, along with a positive relationship with dedicated, community employees who are crucial to the intricate process of growing and producing top-quality medical cannabis.

“Our success can only occur if every person in the company is committed every step of the way.”

Norfolk’s and mayor Luke’s commitment to Maricann have been crucial, Ward credited.

“They have been incredibly supportive to us. We are happy to return the favour in some small way.”

Langton-area native Tammy McIntyre appreciates her short seven-minute commute to work, along with an opportunity for full-time, rather than seasonal employment. She has done ‘virtually everything’ at Maricann including trimming and packaging en route to her current position in cultivation.

“That’s awesome, that is awesome,” McIntyre repeated, pleasantly surprised at the scope of a donation shared by the association her children played hockey with. “Langton deserves it.”

A small rural arena built through the support of the surrounding farming community has always struggled says McIntyre, believing area families and children will benefit from Maricann’s contribution.

“Very generous,” she concluded. “They have stuck to their word on supporting our community.”

Supporting minor sports dovetails nicely with encouraging healthy youth activity, along with what Gubesch believes is at least equally important, the camaraderie and social skill development of team play, or individual effort within a broader organization like the LSC, often generating lifelong friendships.

“This is something that will help and hopefully bring more young people in this arena to be part of that,” said Geysens.

Supporting youth sports is a critical to health and educational development Ayotte says, but the donation also represents delivering on a verbal commitment made during last year’s expansion groundbreaking ceremony.

“It’s my job to hit deadlines but it’s also to deliver on promises.”

Maricann is proud to be part of the community Ayotte continued, and believes in what it is doing along with living up to its commitments.

A ‘good corporate citizen’ in the words of Norfolk County Manager David Cribbs, Maricann ‘just does it right,” said the mayor, ‘very appreciative’ and ‘almost numb’ with ‘what has happened here.

“Not once have they let me down,” Luke concluded. “They do more than talk the talk.” 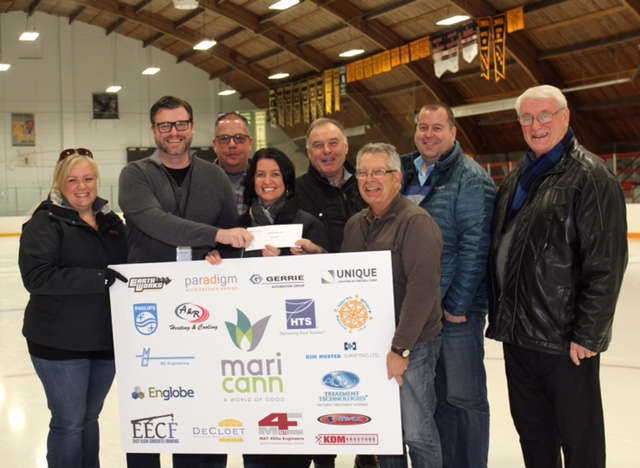