MariCann Inc. of Norfolk County positioning itself to be a global leader in the production of marijuana for medicinal, commercial and recreational purposes, reports the Simcoe Reformer.

MariCann’s operation recently expanded its Langton-area operation from 8,000 square feet to 44,000 square feet. The company employs 60 people full-time, a number expected to rise to about 100 next January. Plans are in the works for a 217,000-square-foot expansion on 97 acres next door. Phase I will be completed this fall. Plans are to eventually grow the production area to 817,000 square feet.

System project manager Wayne Boudreau says consistency of output is critical to large-scale producers of legal marijuana who aspire to brand recognition: “This will probably be the most advanced hybrid greenhouse facility for marijuana when it is done,” Boudreau said at the scene. 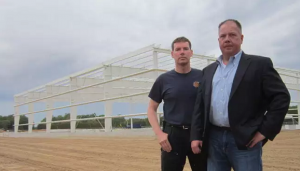 Medicinal marijuana producer Maricann of Langton held an open house Wednesday where it shared details of a major expansion of its facility on North Walsingham Road 8, south of Glen Meyer. Excited about the construction to come are project managers Wayne Boudreau, left, and Jeff Ayotte. Photo: Monte Sonnenberg, Simcoe Reformer