“Thank you to all our sponsors, competitors, volunteers and marina supporters who have supported us over the past 16 years and helped us once again raise funds for this great cause,” said a new release MacDonald Turkey Point Marina.  “Our 16 year total surpassed the $100,000 mark, reaching a total of $104 342.”

With this milestone donation, Brad Thomson and Danny MacDonald were presented with a framed painting done by one of the children who had been a patient at the hospital.

The London Children’s Hospital cares for more that 1,100 children from Norfolk and Oxford counties each year.

“Brad Thomson, The Thomson Family and everyone at MacDonald Turkey Point Marina are very grateful for your support,” the news release said.  “As well, in memory of Madison Thomson, Brad and his family are especially thankful to the London Children’s Hospital for the care she received during the many visits she had to the hospital.  Their kindness will always be appreciated.” 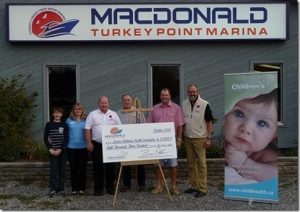