Grain shipments through the St. Lawrence Seaway are up 63 percent so far this season as ships transport corn to Canada and soybeans for international export, reports the Chamber of Marine Commerce. Recently, Zacks Investment Research upgraded shares of Rand Logistics, owners of Lower Lakes Towing of Norfolk County, from a sell rating to a hold rating in a research note released on Tuesday, according to WKRB News & Analysis.

Rand Logistics is a leading provider of bulk freight shipping services throughout the Great Lakes region. Through its subsidiaries, the Company operates a fleet of ten self-unloading bulk carriers, including eight River Class vessels and one River Class integrated tug/barge unit, and three conventional bulk carriers, of which one is operated under a contract of affreightment. The Company is the only carrier able to offer significant domestic port-to-port services in both Canada and the U.S. on the Great Lakes. 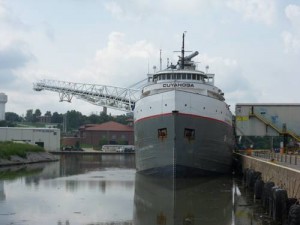