After 23 years with the Ministry of Agriculture, Jan Schooley decided it was time to retire. It didn’t take long before she was sniffing around for a project as she settled back into daily life on the family’s century-old farm.

Jan and her husband Harold eventually landed on the idea of introducing lavender to the farm, and felt it was an interesting way to diversify the third-generation apple orchards. Together, they have watched Apple Hill Lavender blossom into something much bigger and even more special than they could have imagined. 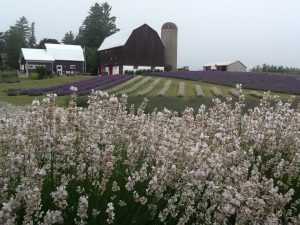 “At first we fiddled around with the lavender and then we jumped in with both feet in 2010, with three-and-a-half acres,” Jan said. A few years later another acre was added and there are plans to increase the acreage again this year – a lavender crop of five or six acres is considered quite large.

The end-use of the lavender determines the varieties to be planted but regardless, when it comes time to harvest, there is no waste as everything is put to good use.

Situated at the front of the farm, the three-and-a-half acre parcel serves as the focal point and is also the producer of the farm’s lavender oil.

“We wanted to have the front part of the farm open to the public,” Jan explained. “That lavender blooms for the entire month of July because when you harvest for oil you do it when the flowers are starting to fade.” 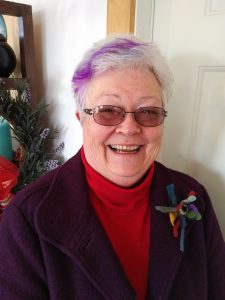 The distilling process is done on-farm and Jan said they get quite a few onlookers who enjoy coming to ask questions. What’s most interesting is the fact that it takes roughly forty pounds of lavender flower to make half a cup of oil. Hence the reason lavender oil tends to be on the pricey side.Lavender that is planted in the back of the farm is used for its buds or for bundled dry flowers. The harvesting of these plots is typically done the beginning of July before the flowers have opened.

Harold looks after the production of the crop, including irrigation, fertilizing and harvesting, while Jan and daughter Melissa, who has become an integral part of the business, are the chemists and artisans.

The rich oil of the lavender plant is used in skincare and cosmetics that Jan and Melissa produce on the farm. The buds are used primarily in recipes — everything from lavender-flavoured drinks, jams, preserves and spices to milk or dark lavender chocolate. Of course, lavender lovers also appreciate the bundles of dried flowers for use in floral arrangements or for decorative purposes around the home.

“We started out doing all the food at a rented certified kitchen but Melissa and I were working so hard it was killing us – it was exhausting.” So, it was decided that if they were to continue in the direction they were headed, they would need to find a few partners.

The Schooleys now drop their recipes off to Rootham Gourmet, a family business in Guelph that prepares and cans preserves for farmers.

All of the jams, preserves, chocolate, skincare, soaps and other home products can be purchased from the on-farm boutique, as well as online at: www.applehilllavender.com.

As an added bonus, Melissa is a professional and award-winning potter, and if visitors are lucky enough they can catch her creating beautiful pieces on the pottery wheel in the summer.

The response to Jan’s retirement project has been overwhelming but the botanist, who loves plants, and especially flowers, loves every minute of this venture. She explained that there are no plans to grow too large for the fact that they want to keep the experience with visitors personal.

Both businesses, Apple Hill Lavender, along with Melissa’s Raging Bowl Pottery, have earned a spot on Ontario Tourism Destination signs along Highway 24 — pointing tourists to the sea of purple and the unmistakably sweet floral notes and mellowing aroma.

“I don’t know any other plant where people will drive miles and miles to just walk through…it’s almost mystical,” Jan laughed.

If you can’t wait until May for the on-farm boutique to open, check out Apple Hill Lavender at the Green Living Show at the Toronto Convention Centre, April 7-10, 2017.