Growers and researchers are excited about the possibility of a  lucrative new large acreage crop in Norfolk County and southern Ontario.

Hazelnuts are being touted as a potential agricultural game-changer spurred by the location of a world reaching market  located in nearby Brantford. 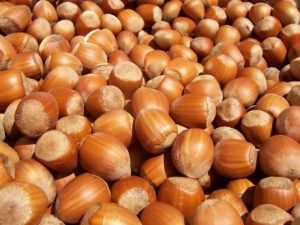 Hodgson first got into hazelnuts in 1991 on his tobacco farm near Courtland. His first nuts appeared in 1997.

However, his crop began to fall victim to Eastern Filbert Blight, the bane of hazelnuts that almost wiped out the entire species. By 2003 he was down to about 150 trees scattered over 25 acres but when Ferrero came to the area his interest was renewed. .

Today, Hodgson said the Ontario Hazelnut Association has an Memorandum of Understanding with Ferrero.

“ They want all the nuts we can produce that meet their standards,’ he said.

Ferraro consumes somewhere around 50 per cent of the world’s hazelnuts in their many plants worldwide.  The company has stated that they want to see 23,000 acres of hazelnuts planted in seven years in Ontario. Current acreage estimates are in the range of 400 acres.

“ This 42,000 acres, if grown all here, would make it the largest non-cash crop in Ontario and would be worth about $126 million,” Hodgson said.
Currently he has about 120 mature trees that are over 20 years in place and several thousand younger clones of various trees.

Through careful cross breeding by a number of individuals over the last century a number of varieties have been found to be immune to the EFB.

The University of Guelph research station at Simcoe has been doing a lot of work over the past decade or so to test various varieties of trees to ensure that they will survive and produce in our climate.

“The big issue is winter hardiness and a short dormancy,” Dale said.
Hodgson is working with the scientists at Simcoe including. Dale and Dr. Toktam Taghavi A number of trees have been grown there with great success.

“They are doing a very good job at trying to develop the science behind this project by selecting trees that are good for this climate.” Hodgson said.

He pointed out that hazelnut farming is something that can fit into regular farming activities.
“Hazelnuts can revitalize the small farms,” he said. “You can make more off of 20 acres of hazelnuts than you can with 100 acres of corn or beans.”
“The biggest challenge we have right now is getting farmers to realize that there is money to be made in growing hazelnuts and to take the plunge and plant at least 10 acres” Hodgson said.
“There is a worldwide shortage of hazelnuts and it will continue
I do not see any down side with growing a lot of hazelnuts in Ontario. The market is there and growing.”

A hazelnut information meeting sponsored by the Ontario Hazelnut Association will be held March 28, 2017, at the Brantford Best Western.