A man’s best friend is his dog and Mat Vaughan is proud to be the maker of Norfolk County’s Top Dog – a hard cider.

Vaughan arrived in Clear Creek four years ago, drawn to the area for nothing more than its rich soil and microclimate…ideal for an apple orchard and vineyard. While others couldn’t see promise in the 23-acre former tobacco farm, Vaughan knew that a little elbow grease and a whole lot of determination would allow him to grow his dream…Hounds of Erie winery.

Inspiration for the label and name comes from Vaughan’s Great Dane, Rohan. “He’s 170 pounds of pure love,” Vaughan said. And Rohan’s portrait graces the label of the hard cider.

While the name and label seemed quite simple, purchasing a farm with a lofty dream was purely a leap of faith, Vaughan admits. “I didn’t have much exposure to farming growing up in Kitchener so I am learning everything the hard way.” What wasn’t new to Vaughan was winemaking, which he began dabbling in several years ago with at-home kits and eventually at the Kitchener-Waterloo Winemakers’ Guild. 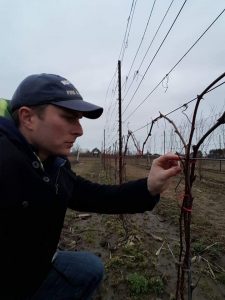 Mat Vaughan, a native of Kitchener, came to Norfolk County in search of good soil and to fulfill his dream of operating an apple orchard and vineyard. – Photo courtesy of Hounds of Erie

This dabbling led to Vaughan earning the Grand Champion Cider Maker at Ontario’s 2014 winemakers’ competition. Then in 2015 he earned the distinction of the province’s top amateur winemaker from the Amateur Winemakers of Ontario, while the Wine Judges of Canada named him the country’s top amateur producer of hard cider the same year.

Vaughan is taking it all in stride and admits it will take a long time before he truly realizes his dream of owning a full-scale winery with a retail outlet and visits from tour groups.

In the meantime, Vaughan and his family (wife Melissa and his two daughters) keep a demanding schedule as Vaughan spends his days as a planner for Norfolk County and has recently gone back to school to upgrade his education in city planning.

“All combined it’s pretty challenging,” Vaughan laughed. “My wife and girls are patient because most days start at 6 a.m. and go to midnight.”

With just one crop under his belt, Vaughan is already working on his third commercial cider and he’ll be introducing his wines next year. 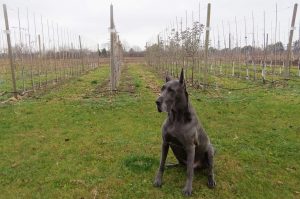 Inspiration for the Hounds of Erie label comes from the family’s Great Dane, Rohan. Rohan’s portrait graces the label of the hard cider. – Photo courtesy of Hounds of Erie

Those wishing to try his two ciders — Top Dog and Best in Show — can do so locally at Schofield’s Bistro and David’s in Port Dover, as well as at the Blue Elephant in Simcoe. And if it suits your taste buds, go ahead and order online through Hounds of Erie on Facebook or stop by Blueberry Hill Estates on Front Road in St. Williams.

While it seems like baby steps for the amount of energy Vaughan and his young family are putting into their dream, he feels the journey to success will be memorable and well worth it.

“It’s tough but then again some of the best things in life come the hard way.”