German Solar Corporation recently announced it plans to set up solar panels along the former CN rail line from Courtland to Delhi in Norfolk County.

The London, Ont., company says it has a deal in place to buy the land from CN and is waiting for final approval from the Ontario government for a Feed-In-Tariff contract, reports Daniel Pearce of the Simcoe Reformer.

The project will be broken up into seven smaller sites along the rail line and will use only some of the land, the company told council. 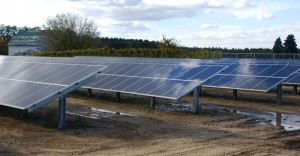