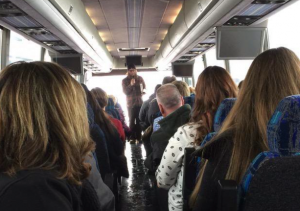 About 50 business owners, farmers, chefs, local officials and other individuals from Norfolk County and Ontario’s Southwest toured the Finger Lakes Region of New York State on a two-day, one night business study tour in March 2015.

“The goal of the study tour was to learn from people at similar businesses in communities similar to those in Norfolk County and Ontario’s Southwest,” said Clark Hoskin, Manager of Tourism and Economic Development for Norfolk County. “Participants felt they learned a lot about the importance of working together, staying positive and collaborating for success.”

One of the most useful stops on the tour was Penn Yan, a town of 5,000 people in Yates County, population 25,000. Not only did the group learn about the community’s plans for three hotel developments, but also toured downtown revitalization projects and a social enterprise that helps feed disadvantaged youth.

Another stop highlighted a business incubator focused on agri-food opportunities. Tenants include a cherry-juice processor targeting professional sports teams and a business producing artisanal oils from seeds of squash and pumpkin. Both operations source product from area farmers.

In a survey of participants after the tour, 100% of respondents believed the tour was a valuable investment of time and money. All said they would share what they learned with others. The group was supportive of future tours and the majority said they would be following up with the people they met in the Finger Lakes.

The tour was organized by Norfolk County Tourism & Economic Development. The tour was funded by participant registration fees and financial support from Southwest Ontario Tourism Corporation and the Ontario Ministry of Tourism, Culture and Sport.

You can read about the tour in a series of posts at clarkhoskin.com. 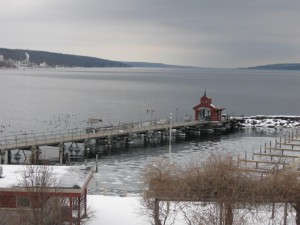