First nine months of 2017 outperform all of last year

Construction activity in Norfolk County in the first nine months of 2017 has outperformed all twelve months of last year, according to the municipality’s Building Division.

New housing starts are up significantly with 323 new dwellings constructed as of September 30th. It is likely that this number will exceed 400 by the end of 2017.

The increases are represented in all sectors of the economy:

“I have spoken to other builders in addition to the members of the Haldimand Norfolk Homebuilders Association and we all think that Norfolk County has improved their building permit review process,” said Brian Bunting, President of Prominent Homes. “We are all very happy with the review period taking up to 10 business days or sooner in some cases. Thank you very much for your management to improve the building permit review process.”

“With the support of our homebuilders and local developers, Norfolk County Council recognized the need to augment resources in the Building Division to immediately respond to the significant increase in local development,” said Christopher Baird, General Manager of Development and Cultural Services for Norfolk County. “The results are clearly being observed and appreciated by our local industry.”

This is the third year in a row that each year has outperformed the previous year’s construction activity.

For more information about the Norfolk County Building Division, go to http://www.norfolkcounty.ca/living/building/ or call 519-426-4377. 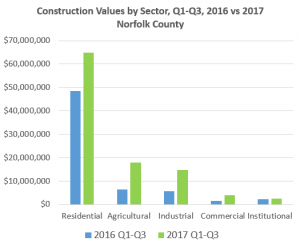